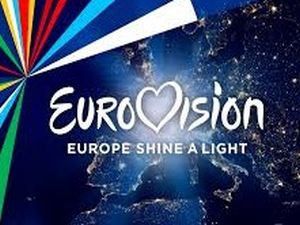 The 65th Eurovision Song Contest was scheduled to take place between 12th and 16th of May 2020 at the Ahoy Arena in Rotterdam.  However on the 18th of March the EBU announced that the contest was cancelled due to the Coronavirus pandemic.   On the night of what would have been the contest final, the three Dutch presenters hosted a show called “Eurovision: Europe Shine a Light” that showcased the competing entries as well as remembering and marking the victims of the pandemic.

On 18th September 2020, the EBU announced that the 2021 contest would definitely take place in one form or another and so it did, with a limited audience at the Ahoy Arena in Rotterdam, the same venue and hosts as were planned for 2020.   Twenty-six of the thirty nine entrants sent their planned 2020 performer.  A new (and apparently temporary) rule was passed for 2021 allowing pre-recorded backing vocals on an entry.   The contest turned out to be remarkable for the resurgence of “old” Eurovision stalwarts and the success of non-English songs.   Only one of the top five entries was performed in English.  Switzerland in third and France in second achieved their best result in decades while rock band Måneskin gave Italy it’s third Grand Prix, a win that launched them to considerable global chart success in the subsequent months with other material than their contest winner.

In 2022 Eurovision attempted to return to pre-Covid normality in Turin.  However the February invasion of Ukraine by Russia cast a different kind of shadow over the event.  Russia were almost immediately disqualified from the event, before their entry had been revealed.  Ukraine immediately became hot favourites to win based on supportive votes, but had their own internal drama when the winner of their national final was replaced by the song that came second.  But the pre-season and contest week were pretty much back to normal to be fair.  RAI put on three impressive shows despite the main stage feature malfunctioning, which impacted several country’s presentation.   In the grand final the voting featured a startling and long overdue return to form from both the United Kingdom and Spain, however a massive televote for Ukraine and Kalesh Orchestra saw Ukraine ease to victory by a large margin.

The 2023 Eurovision Song Contest will be staged in the United Kingdom on behalf of Ukraine.