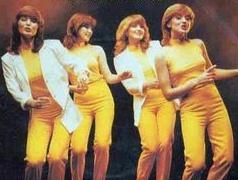 Unable to find a big-name artist the BBC opened up Song For Europe to all-comers in 1976. A grand final was staged at the Royal Albert Hall where twelve acts performed for the regional juries. This was also the start of a period when groups would dominate the UK selection. Among the soloists who fell by the wayside were Tony Christie, Tammy Jones, Frank Ifield, making his last attempt to sing for the UK and Hazell Dean making her first. In a bizarre twist Polly Brown first sang solo then as one half of Sweet Dreams. All were bested by a reconstituted Brotherhood of Man, but lets not forget that Eurovision would be missing an all-time classic if just one jury had voted differently.
After such a resounding success the identical formula was used in 1977, and a similarly semi-starry field was present, including Carl Wayne, chart-toppers Sweet Sensation and Lyn Paul, who had sung co-lead for the New Seekers in 1972. Unfortunately a strike at the BBC meant that the contest was not televised (a strike that would even delay the song contest itself later in the year) so Lynsey De Paul and Mike Moran’s song was chosen by the juries purely on the radio broadcast.
1978 saw another twelve song final, but the list of entrants was quite significantly lesser know than the previous years, a trend that would sadly be continued in subsequent SFEs. Labi Siffre was about the only notable artist, at least winners Co-Co perhaps deserved a chance at Eurovision as they had only lost out by a couple of points two years earlier. This final saw a higher number of black performers than previously and their collective lack of success caused dismay in some quarters at the time.
The 1979 contest was again marred by BBC strike action, this time not even being broadcast on radio. The regional juries reached their decision based upon cassette recording, that is, all but the Manchester jury which could not be contacted!. Guys and Dolls, Herbie Flowers and the mighty Nolan Sisters were thus unable to strut their stuff to the nation, and so perhaps it’s no surprise that the rather banal “Mary Ann” took the crown.
After this debacle it was inevitable that SFE would be a less attractive proposition for established acts and so the 1980 contest saw yet another reduction in even semi-famous names. 1978 winners Co-Co were back, now calling themselves The Main Event, but they finished a resounding last of the dozen songs. Perhaps the best known artist was Maggie Moone and her very strong song finished equal top before sadly being pipped in a tie-breaker.
1981 saw the SFE continue to contract and diminish as the number of finalists was reduced from twelve to eight. Gary Benson who’d had a hit with his own composition from the 1975 SFE returned as a performer this time, but by far the biggest names were pop/disco band Liquid Gold, who came a strong second but had to give best to the gimmickry from Bucks Fizz. The song in fourth place, “Have You Ever Been In Love” went on to be a huge hit for Leo Sayer.
Despite the success of “Making Your Mind Up”, the 1982 SFE did not see big names queueing up to defend the crown in Harrogate, in fact quite the opposite. The winning song by Bardo was virtually indistinguishable from most of the songs around it. Paul Curtis, who was a constant presence a as songwriter in 80s SFE, took his first bow as a performer. The most interesting song was “Dancing In Heaven” by Q-Feel which became something of a cult electro dance classic, and even cracked the American Hot 100 seven years later!.
By 1983 the curse of Bucks Fizz was in full swing as SFE was swamped with bouncy, upbeat tunes sung by manufactured “groups”. Whether it was one-guy-two-girls, two-guys-two-girls, or any other permutation the sound remained the same, and quite often the singers too would be recruited each year from the same pool of beaming wannabees. As these tunes weren’t setting Eurovision on fire, it was clearly time for a shake-up.