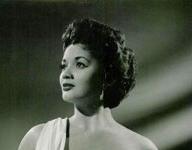 The very first Song For Europe (henceforth known as SFE) was staged on 12 February 1957. Six songs participated after each advanced from one of three semi-finals, and each finalist was performed by two different singers (this practice was adopted by a few other countries too in the early days of the contest). The voting was done by regional juries. Lita Roza, Ronnie Hilton and Bill Maynard (whose son would sing for the UK twenty-nine years later) became the first famous names to try to sing for their native country but fall at the final hurdle. The winner was a light-operatic number that clocked in at just 112 seconds. Patricia Bredin was selected over Malcolm Lockyer to present the song in Europe.
After a years gap, the UK returned in 1959 to begin the longest unbroken sequence of any nation at the contest (France have stormed off in a huff a couple of times and Germany’s record was spoilt by elimination in the 1996 qualifier). The idea of two singers per song was ditched but again there were semi-finals (just two this time). Lita Roza was once more there at the sharp end but had to give way to the first of a long list of chirpy/bouncy UK chosen songs, as presented in this instance by Pearl Carr and Teddy Johnson.
Encouraged by their strong second place, Pearl and Teddy returned in 1960 but had to give best to Teddy’s brother Bryan. Again there were two semi-finals.
1961 saw the first straight final consisting of nine songs. Like his sibling, Bryan Johnson came back for another stab at glory after a runners-up spot in Europe the year before. As the contest had by now grown in popularity he was faced by quite an array of well-known singers, including Ricky Valance, Craig Douglas, Anne Shelton and Mark Wynter. All had to admit defeat however to the wholesome Allison brothers.
More famous singers of their time threw their hat into the ring in 1962, including actor/singer Kenny Lynch, Donna Douglas and Karl Denver. The yodeling Aussie Frank Ifield made his first attempt to represent the UK and conquered all but the winner Ronnie Carroll.
Carroll finished fourth, which was something of a letdown after three consecutive runner-up showings, so he returned to SFE in 1963. Quite remarkably, despite entries from Anne Shelton once more and Vince Hill, he won again and remains to this day the only UK singer to enter consecutive contests.
Ronnie’s second entry fared no better (but no worse) than his first, and the BBC took a radical step in 1964 that would change the format of SFE for the next dozen years. One popular singer was signed up to perform all the six final songs before the public. Matt Monro was the first choice, but although his winning song won SFE by a landslide (and was runner-up in the contest), it failed to crack the UK chart and is seldom found on Monro collections.
In 1965 the baton was passed to Kathy Kirby, and another change occurred as the regional juries were replaced by a national postcard vote. This change may have contributed to a much closer margin among the top three songs.
The 1965 Eurovision champion “Poupee De Cire Poupee De Son” can probably be classified as the first “modern” sounding contest winner, so it was quite a surprise when the BBC chose the determinedly old-fashioned Kenneth McKellar for the 1966 event. The number of songs in the final was reduced from six to five. His chosen song easily scored the worst of any UK song to that date, so it was clear some modernization was urgently required.