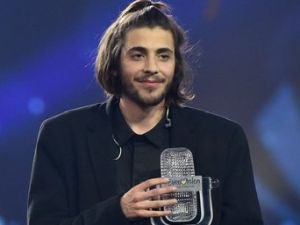 Oslo 2010 started out by seemingly using the 1999 Jerusalem contest as a template, utilizing three comperes for only the second time ever and matching the earlier event for the latest contest ever, both of them staged just 48 hours or so before the start of June, although reportedly the original plan was for a week earlier but rescheduled so as not to clash with the UEFA Champions League Final. After two contests when a hot favourite romped to victory we happily arrived in Oslo with a quite wide-open field with a handful or more of potential winners. The public phone-lines were open from the very first song in a departure from normal procedure, although this eventually had little effect on the scoring as the highly regarded songs from Azerbaijan, Norway and Spain (who got to perform twice after a brief stage invasion) all fell short of expectations. After some very random early voting, the German entry which had already become a local smash hit pulled away to a victory that was clear, but not on the scale of Norway a year before. More striking though was that “Satellite” was a state-of-the-art pop song that had zero gimmicks and performance choreography.

For the first time in thirteen years the contest was staged in a Big Four country, who now became Big Five with the return of Italy. Also returning was last years winner Lena, which got us all foaming with potential home town bias etc. Other returnees were Austria, Hungary and San Marino, boosting the total entry to a record-equalling forty-three. The semi-finals took place and fans were agog with disbelief at both Armenia and Turkey failing to make the final. At the same time middle Europe (Austria, Switzerland, Slovenia, Hungary) all made it. Seems like the semi-final seeding and the 50/50 voting had rescued the contest from disrepute after all. Come the final, we saw the most disparate, scatter-gun voting for many years. The EBU, worried about audience tedium during the voting, tried to implement a voting-order formula but it didn’t matter at the end as there was no runaway winner. The Azeris claimed their first victory with a rather ill-matched duo and a top-dollar (probably literally) cheesecore inoffensive ditty.

The fifty-seventh Eurovision Song Contest final was staged on May 26th in Baku, Azerbaijan. Forty-two countries turned up, Armenia having withdrawn after the original entry deadline due to concerns about the safety of their delegation in Baku. The lead-in to the contest was also dogged by controversy over the Azeri regime and human rights. The voting saw a landslide win for pre-contest winner Sweden, and a song that went on to become one of the most commercially successful Eurosongs ever. After the previous year’s tense voting, 2012 saw the opposite as not only winner. but second and third places were settled long before the end of the mammoth voting sequence. The media story of the contest, the Buranovskiye Babushki grannies from Russia were easily seen off by Loreen and her fauxflakes. For the UK, Englebert Humperdinck’s low-key ballad was drawn first but finished second last. Ireland’s Jedward slumped to a nineteenth place, eleven lower than last year in a dreadful night (Sweden excepted) for North-West Europe. Despite another year with a 50-50 split between jury and televote, the voting suggested that juries were now maybe mimicking the naughty voting tendencies of the general public.

Lots of changes for 2013. The organizers, with the approval of the EBU, broke with decades of tradition by choosing the running order for both final and semi-finals (the only random element being drawn into first or second half of the order), the objective being to make a better TV show. Another change was to revert to single presenter, Petra Mede, for the first time in eighteen years. This was an undoubted success with many observers concluding that Ms Mede was the biggest success of the night. A more subtle and less publicized change was how national jury and national televotes were combined, meaning for the first time that song placed top by one or the other could end up with no votes if the other element marked it near the bottom. This led to much puzzlement and acrimony in the immediate aftermath of the contest. Denmark’s Emmelie de Forest made the short hop to Malmo as red-hot favourite and did not disappoint, as the top six places were filled by countries who had won the contest in the twenty-first century. Azerbaijan completed the remarkable feat of finishing in each of the top five positions in five consecutive years. Near the other end of the scoreboard languished the old “Big Four”, who collectively had their worst contest since 2005.

Copenhagen staged it’s third contest in a disused shipping building and succeeded in a wonderful presentation, with a result that refreshingly upset the bookmaker odds. A reduction in entrants meant that the odds of making it through the semis were the best ever but it was still a delight to see both Montenegro and San Marino make their first final. Each semi-final also created a buzz around an unfancied song from a nation with a dreadful recent record at the contest, firstly the Dutch country song by the Common Linnets, and then the Austrian Bond-esque contribution from Miss Conchita Wurst. Come the day of the final, Sweden and Armenia were neck and neck in the betting, but by the end of the night they sat in third and fourth place, well behind the top two (both of which went on to score significantly in the commercial charts around Europe). The opposite side of the coin saw some nations with fantastic recent records come to grief as Azerbaijan’s fire petered out in twenty-second place, a couple of spots behind Greece and one behind Italy. Spain went from worst big-five to best, although as it turned out there wasn’t much competition.

Conchita’s victory brought the sixtieth to Vienna and Ms Wurst was heavily featured in both semis and finals as a supplementary presenter. For the first time ever the triumvirate of main presenters was all-female. Australia were gifted a “guest” entry by the EBU, and on top of that given direct entry to the final AND able to vote on both semis. Their representative Guy Sebastian did them proud with a fifth place. Above him Italy’s Il Divo won the televote but poor votes from the juries pegged them into third place. Russia’s Polina Gagarina led for part of the voting and finished a strong second, having to endure huge amounts of booing from fans in the arena (aimed at the Russian political leadership), to the extent that the presenters had to issue a pointed warning half-way through the voting. Meanwhile by the end of the night Mans Zelmerlow and a highly visually animated entry had given Sweden their sixth Grand Prix, leaving them just one victory behind Ireland.

The 61st edition of our favourite contest was staged at the Globen in the Swedish capital and was hosted (excellently) by defending champion Mans Zelmerlow and fan favourite Petra Mede, the latter becoming only the third person to present more than one contest (Katie Boyle and Jacqueline Joubert being the others).   Australia retained their entrance but this time had to qualify from the semis.   The Romanian entry was ejected from the contest just weeks before the event due to the TV stations debts to the EBU.  The organisers inaugurated a major change to the voting whereby rather than each country merging its jury and telephone votes they were awarded separately meaning two sets of votes from each nation.  The jury votes were announced first and put the Aussies in a commanding lead.  The televotes were aggregated and announced in reverse order.  While Russia topped the televote, the combined vote put Ukraine top of the scoreboard despite topping neither jury nor public vote.  Poland were 25th after the jury voting but a third place in the public vote shot them up the table to eighth overall.  The Czech Republic qualified for the final for the first time, leaving just Andorra as the only nation to have participated in Eurovision but never in a final.  Germany finished bottom of the scoreboard for the second year in a row.  So despite a rather drab set of songs the 2016 contest delivered with excellent hosts and the voting revamp overall worked very well.

The sixty-second contest contest was overshadowed by a dispute over  the participation of Russia in a contest staged in Ukraine.  Weeks before the contest the Ukrainian hosts  made it clear the that the Russian singer would not be allowed entry to Ukraine as she had performed in the disputed area of Crimea.   Moving on from that Ukraine presented a contest with a symbol of a red croissant and the slogan “Celebrate Diversity” when the contest was presented by three white men.   Italy came into the contest as a red-hot favourite with fans and bookies but would end the night in sixth place.  For the first time since 1966 every country in the top three achieved their best Eurovision result.  Moldova’s crowd pleaser and Bulgaria’s big ballad couldn’t have been more different.   The big story of course was Portugal.  Competing  since 1964 (with a few absences) since 1964 without even ONE top five result.  A charming performance by Salvador Sobral of a timeless song written by his sister charmed the pants off juries and televoters alike.

Portugal at long last got to host and it was a nautical theme “All Aboard” at Altice Arena.   A new presenting variation in a quartet of female presenters.  The Russian singer from 2017 Julia Samoylova returned but was eliminated in the semi-final, breaking their 100% qualification record a fate that similarly befell Azerbaijan and Romania.   A Chinese TV station was thrown out by the EBU after censoring some semi-final performances.  Long time pre-contest favourite Israel were surpassed in betting odds by Cyprus during rehearsals but come the big night Netta netted the fourth Grand Prix for Israel ahead of Cyprus and jury winner Austria.   The UK finished in 24th position for the third time in four years after singer SuRie had to endure a stage invader grabbing her mic mid-song.

The sixty-fourth Eurovision final took place at the Tel Aviv Convention Center on May 18.   The city was chosen above Jerusalem as the latter was deemed to be too controversial a venue politically.   Ukraine selected an entry but withdrew before the contest as the performer (and others in the national final) refused to sign contracts relating to aspects of the ongoing Russian occupation of Crimea. The long interval in the Grand Final was graced by none other than Madonna, delivering a typically memorable performance.  North Macedonia competed for the first time and celebrated by achieving easily it’s best result, winning the jury vote and finishing seventh overall. However performer Tamara Todevska did not get to enjoy her moment as a complete cock-up with the Belarus jury vote meant that Sweden were declared as jury winners on the night.  The televote was won by Norway’s KEiiNO who would finish sixth overall.  The overall vote was topped by Duncan Laurence of the Netherlands (2nd televote and 3rd juries) with a 498-472 decision over Italy’s Mahmood (3rd/4th),  thus giving the Dutch their fifth Eurovision win putting them alongside France, Luxembourg and the UK.