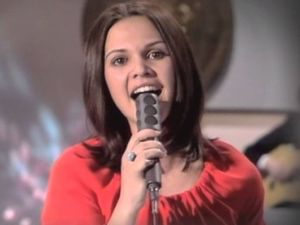 This was the year of the boycott: Norway, Sweden, Finland and Portugal all protested at the previous years voting farce. This made it the briefest contest since 1959, it was all done and dusted in seventy-five minutes. Julio Iglesias appeared in his powder-blue suit. He seems to have forgotten this nowadays; good job he didn’t win then. Luxembourg scored an atypical nul points before winning two of the next three contests. Belgium awarded nine out of its ten votes to Ireland. Although ‘All Kinds of Everything’ was a worthy winner, the voting system meant that one jury could have a disproportionate impact on the result if it ‘block’ voted like this. This voting system was replaced the following year, and only used one more time ever (in 1974).

The first year of previews (hurrah!), in the UK anyway, Marianne Mendt kicked things off for Austria, wearing a fur coat and smoking a cigarette. PC hadn’t got very far in 1971. Another tiny auditorium, Dublin’s Gaiety Theatre staged the event (and to think that the 2001 contest was staged in a soccer stadium), it was so petite that the hostess was deposited on the balcony, and had a wonderful backdrop resembling three enormous condoms. This was the first of three years when each country sent two jurors to the host city to vote from 1-5 on each song, sadly removing the possibility of nul points for anyone. The Luxemburg jurors repeatedly awarded 1 point (the minimum possible) for song after song. The fact that they BOTH did it makes you think doesn’t it?

The United Kingdom commentary was done by Tom Fleming, yes that’s right he of royal weddings fame. Can you imagine David Dimbleby taking Wogan’s place ? As a nod to the Scottish venue, Moira Shearer took Katie Boyle’s place as compere. There was a great romance within the New Seekers: The leads on ‘Beg Steal Or Borrow’ were sung by the then lovebirds of Peter Doyle and Lyn Paul. Within a year romance would fizzle out and Doyle have left the group, leaving Lyn Paul to sing lead on ‘You Won’t Find Another Fool Like Me’. Yves Dessca surrendered the songwriting laurels to….. Yves Dessca. Both Luxemburg and Monaco brought in foreign talent and no-one seemed to mind too much. The French Severine swept on stage to congratulate Greek songstress Vicky Leandros. Monaco ceased competing in 1979 and Luxemburg in 1993; Vicky Leandros has continued to be a popular singer, especially in Germany, where she made an unsuccessful effort to sing for them in 2006.

Nicole and Hugo sang for Belgium, but who was listening to the song as they spun around the stage in their purple bellbottoms. They were due to sing in 1971 but Nicole was ill, I wonder what sartorial delights we were spared in Dublin. Disco starlet in the making Patrick Juvet sang ‘Je Vais Me Marier Marie’. Five years later he loved America but in 1973 he carried the colours of his native Switzerland.
Another Swiss wannabe, one of their jurors (on camera remember), really hammed it up when displaying his votes. He may or may not have been the reason why this type of voting was abandoned after this year. Or it may have been the very tight result between the top three. The runner-up song “Eres Tu” went on to become a huge international hit, even conquering the American top ten. The contest was held under suffocating security following the Munich Olympic massacre some months earlier. The audience were told not to stand up during the contest or they may be shot!.

Sven-Olof Walldoff, the Swedish conductor, dressed up as Napoleon to conduct ‘Waterloo’, totally in keeping with the brash, ‘in-your-face’ nature of Abba’s presentation. Ironic, though, given Abba’s tremendously successful career in Britain, that ‘Waterloo’ received ‘nul points’ from the United Kingdom jury. France withdrew in the week of the contest due to the death of President Pompidou. The voting was announced in an order ‘determined by lot’. In the very early years of the contest, the votes were announced in reverse order of performance, but for most of ESC history, the order of voting has mirrored that of performance. However, in 1974 there was apparently a suspicion of vote-rigging so the votes were announced in a seemingly random order; although, strangely enough, Finland and Italy occupied first and last places in the voting, just as they had in the singing. Katie Boyle was confronted by a placard-carrying Womble at the end of the interval act, a video of the furry creatures who were storming the charts in 1974. It was not divulged whether our little friend from Wimbledon recognised a lost relative that had become part of Katie’s frock.

A noticeably bigger arena than usual (or at least appeared to be on television) greeted Eurovisions largest field to date, as (despite Greece sitting it out after their debut) France and Malta returned and Turkey debuted to make nineteen nations in the Swedish capital. Presenter Karin Falck promised us ‘a certain amount of light entertainment with music’ in an evening peppered with classic quotes. Bruce Welch of the Shadows fluffed his lines on the UK entry ‘Let Me Be The One’. Well, they were more used to doing instrumentals. This was the first year of the current scoring system, 12-10-8-7-6-5-4-3-2-1 votes awarded for a jury’s ten favourite songs, although at this time the votes weren’t announced in ascending order so there was plenty of scope for problems. The strengths of this voting system are that even mediocre songs will tend to pick up a few points here and there (to maintain their dignity) and also that no one jury can exert disproportionate influence by awarding a higher top vote than other juries. The Netherlands became the first country to win Eurovision with the song that opened the contest, although we wouldn’t have to wait too long for the second one….

Everyone remembers ‘Save Your Kisses For Me’, the UK winner, and arguably the most successful contest winner ever, but the second-placed song was quite special too, ‘Un Deux Trois’, sung for France by Catherine Ferry. If you discount the very first contest in 1956, when the voting was not made public, and the years 1971-73 when every song had to receive some votes from each jury, ‘Un Deux Trois’ became the first song to receive votes from every jury and not win the contest. Norway’s Anne-Karine Stroem was back for third try, this time solo after two goes with the Bendik Singers. Her glamourous likeness was posted on Dutch (the host nation) newspapers before the contest, but sadly her mega-kitsch tribute to the exotic spy Mata Hari finished bottom of the pile (shame!). Amid all the bubblegum pop there was a distinct air of the political. The Greek entry was a song about the Turkish occupation of Northern Cyprus and the Israeli song was performed by a group formed by three women doing their national service.

This was the contest that almost didn’t happen. It was originally postponed by industrial action at the BBC but eventually went ahead later that spring, with a distinct absence of trimmings: Between songs, there were no postcards, rather shots of the audience in the Wembley Conference Centre, and the interval consisted of some amateurish footage of Acker Bilk serenading the contestants in a nightclub. A major chart act of the time, Silver Convention represented Germany, fresh from two top 2 singles in the USA with ‘Fly Robin Fly’ and ‘Get Up and Boogie’. However, by ’77 their appeal was on the wane and they never looked like winning. Their song ‘Telegram’ only made no. 103 in America. Presenter Angela Rippon (still basking in her new-found celebrity after wowing the previous years Morecambe and Wise Christmas show) and prize presenter Sir Charles Curran were kept waiting by Marie Myriam as a cameraman tripped over backstage. Today Marie regularly pops up to present the French votes on the big night.

The first contest to be presented by a duo: Leon Zitrone entered Eurovision history as the first male presenter since the very first contest twenty-two years earlier, in whose footsteps such illustrious names as Ronan Keating, Morten Harket and Sir Terry Wogan would follow. Greece and Turkey competed together for the first time and Denmarks return after a dozen years upped the field once more to a new record of twenty. The first two entries were a double whammy: Colm Wilkinson, on his way to becoming a major musicals star, gave it loads for Ireland, and then second up was Jan Teigen, with a performance not so much over the top as over the horizon. Teigen gained notoriety for ‘nul pointing’, although many songs had scored zero before and would do later. His was however the first blank for 8 years. (From 1971 to 1973 the scoring system made it impossible to score zero). Not learning from the fate of Silver Convention the previous year, another hit girly disco act was entered for Luxembourg. Baccara were at the peak of their powers in 1978 but could finish no higher than 7th with their thinly-veiled clone of “Yes Sir, I Can Boogie”.

The contest took place in Jerusalem following Israel’s win in 1978, and, consciously or not, there was a lot of peace and love in the air. Not really a surprise then that Israel’s uplifting, simple repetitive anthem fought it out with Spain’s sugar-coated kiddies anthem. Austria submitted a classy, distinctly non-Euro song called “Heute in Jerusalem” that was just too different to hit the spot. This year was also the peak of the disco boom, and Germany’s contribution to the joy and love was a tribute to Genghis Khan that owed more than a little in both style and substance to Boney M’s “Rasputin”. The song though, along with Denmark’s “Disco Tango” has become a Eurovision evergreen. One of the truly unique performances in Eurovision history occurred when Switzerland took the stage. Now we’ve seen some props on stage over the years, but these guys were “playing” garden tools and dustbin lids. Peter Reber called it ‘trash music’, a term which could be applied to many entries over the years.