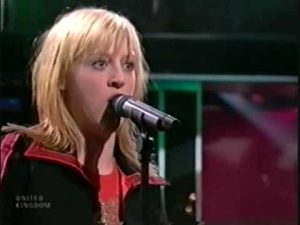 Lindsay Dracass (also known during her Eurovision era as either Lindsay D or just plain Lindsay) was born in Sheffield. Her prodigious teenage talents brought her to the attention of record companies. Due to being just sweet sixteen at the time of the 2001 contest the BBC had to apply for a special licence for her to participate in Copenhagen.

Despite the recent year-on-year decline in fortunes the BBC kept to the exact same format. Unusually, one of the four songs eliminated in the semi by the Radio 2 listeners, “To Die For“ by Luke Galliana, made the UK singles chart, peaking at #42, just ten places lower than “No Dream Impossible”.

The final also featured a successful Eurovision singer from overseas. Swede Nanne Grönvall was third in the 1996 contest as part of trio One More Time. Her song here was another written by Kimberley Rew (of Katrina And The Waves) but finished last of four in the televised final. “No Dream Impossible” romped to victory a clear thirteen thousand plus votes ahead of runner-up “That’s My Love” by Tony Moore.

Drawn 16th of 23 in the only contest so far staged in a football stadium with a roof on it.

This contest was notable for the number of songs performed in two languages. No less than six songs were sung partly in English and partly in the native tongue.

This was also the first year that the European Broadcasting Union recognized that televoting was not without it’s problems and allowed countries to opt for a mix of public phone vote and jury vote.

“No Dream Impossible” rather amazingly was co-composed by legendary singer-songwriter Russ Ballard of 70s glam rock band Argent (the ones who told you that God gave rock and roll to you).

Lindsay performed the song on the vast Parken stage in casual dress appropriate for her age, and was backed up by a couple of young tyke male “rappers” who did their bits at the start and half way through, and a trio of backing vocalists who pretended to play cellos.

“No Dream Impossible” got votes from eleven of the other twenty-two countries. Its top vote was four from Ireland.

The song made #32 in the UK singles chart

Since Eurovision Lindsay has performed regularly as a back-up singer with Paul Carrack, been a vocal coach, and currently tours with her own band, unsurprisingly called The Lindsay Dracass Band.

No Dream Impossible was not the easiest song to perform for a seasoned veteran, let alone a sixteen year old newcomer. The climax involved a very high last note that had troubled Lindsay in both the national final and a Top Of The Pops performance. On the big night in Copenhagen, despite a few iffy moments en-route she nailed the last note. Such was the air of trepidation in UK supporters that Sir Terry Wogan’s exclamation reflected all our relief.

The song’s result was broadly simliar to that of “Don’t Play That Song Again” a year before, and that wasn’t the only similarity. Despite the 2000 outcome on contest night, once more the UK audience went for the clubby song from the four on offer. Whether this was due to the personal tastes of the voting demographic, or just the assumption that it would do best in Copenhagen, we’ll never know. So another (at the time) disappointing result for the UK.