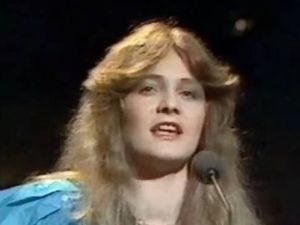 A quick pop-picking look at how the UK entries and contest winners have fared in the British pop charts. Where shaded, the UK and the winner were the same! NB. We are now using the top 100 as the cut-off point (even when only the top 75 was published at the time).

Recent changes to how we consume music are reflected in the latest years.   The download era saw many more Eurovision entries make the chart in the week after the contest.  Conversely the addition of streaming into calculating the chart has been very detrimental.

In 1959 the sixth placed song “Ciao Ciao Bambina” by Modugno made #29 in the UK chart, a cover version by Marino Marini (once more!) also charted.

In 1960 the eighth placed song “Romantica” by Renato Rascel (you guessed, Italy) was covered by Jane Morgan and made #39.

In 1961 the fifth placed song “Al Di La” by Betty Curtis (yup, Italy) was covered by countryman Emilio Pericoli and made #30.

In 1964 the sixth placed song “Warum Nur Warum” by Udo Jurgens (Austria) was covered by that years UK entrant Matt Monro in an English version called “Walk Away”. While Matt’s own entry failed to chart, “Walk Away” made #4 in the UK.

In 1966 the winning song “Merci Cherie” was covered in English by Vince Hill and made #36.

In 1967 the fourth placed song “L’Amour Est Bleu” by Vicky Leandros (Luxembourg) went on to be covered by many artists over the next year. The Paul Mauriat Orchestra made #12 and Jeff Beck made #23 with instrumental versions, both in early 1968, and the Dells combined it in a medley with “I Can Sing A Rainbow” making #15 in 1969.

In 1968 the tenth placed song “Marianne” by Sergio Endrigo (Italy) was translated into English and covered by UK entrant Cliff Richard, and made #22 in late 1968.

In 1969 the three winning songs other than Lulu’s failed to crack the UK chart.

In 1974 the songs placed second and third both made #8 in the UK chart. They were “Go” by Gigliola Cinquetti (Italy) and “I See A Star” by Mouth & MacNeal (Netherlands).

In 2000 the winning song “Fly On The Wings Of Love” by the Olsen Brothers (Denmark) failed to chart but a cover by XTM & DJ Chcuky Pts Annia made #8 three years later.

In 2007 the second placed song “Dancing Lasha Tumbai” by Verka Serduchka (Ukraine) made #28 and the third placed song “Song 1” by Serebro (Russia) made #99.

In 2008 the third placed song “Secret Combination” by Kalomira (Greece) made #71.

In 2009 the second placed song “Is It You” by Yohanna (Iceland) made #49, the twentieth placed song “Miss Kiss Kiss Bang” by Alex Sings Oscar Swings (Germany) made #85 and the twenty-fifth and last placed song “Lose Control” by Waldo’s People (Finland) made #100.

In 2011 the eighth placed song “Lipstick” by Jedward (Ireland) made #40, the third placed song “Popular” by Eric Saade (Sweden) made #76 and the fifth placed song “New Tomorrow” by A Friend In London (Denmark) made #78.

in 2015 the fourth placed song “Rhythm Inside” by Loic Nottet (Belgium) made #69 and the runner-up song “A Million Voices” by Polina Gagarina (Russia) made #97.

In 2020 when the contest did not take place due to the Coronavirus pandemic the Icelandic entry “Think About Things” by Dadi Freyr made #34.

In 1971, “Another Time, Another Place”. fourth (do you sense a pattern here?) in Clodagh Rodgers Song For Europe, was taken to #13 by none other than Englebert Humperdinck!.

In 1973 “Help It Along/Tomorrow Rising”, which were respectively placed third and fourth in the UK selection, scored a double A-side #29 hit for Cliff Richard.

In 1975 “Don’t Throw It All Away”, which placed fourth in the UK selection, made #20 for its composer Gary Benson.

In 1981 “Have You Ever Been In Love” finished fourth in the UK selection but a year later made #10 for Leo Sayer. Also “Don’t Panic” by Liquid Gold achieved #42.

In 1982 “Fantasy Island” failed in the Dutch final but a cover went on to very soon achieve #5 in the UK chart for Tight Fit.

In 2001, “To Die For” by Luke Galliana, which made the last eight of the UK selection but not the televised final, made #42.