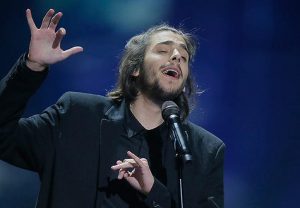 Eurovision entries can be no longer than three minutes and they must have a vocal. There have never been totally instrumental entries (though the 1995 Norwegian winner came closest). So what language to sing in? When the contest began, songs were performed in native tongue by habit, but after Sweden tried something in English in 1965, rules were brought in.

From 1966 to 1998 entries had to be sung in a native language of the country, with the exception of a five year period in the mid 70s. This period coincided with a string of big selling winners like “Waterloo”. During this period, Scandinavian and Benelux countries took the chance to sing in English and most tended to fare better than before. Would Abba have won and broken through if they had been forced to perform in Swedish?.

By 1977, the European Broadcasting Union who run the contest had decided to revert to the old rule. Their decision was made after the Belgian and German songs had been selected, and neither had a native language version, so they were allowed to sing in English. Neither did especially well. The native-language rule was well and truly back in place and would remain so for more than two decades. During this era, there were some oddities. France sent songs in both the Creole and Breton dialects. Belgium alternated religiously between French and Flemish. Back in 1972 Ireland sent a song in Gaelic. Switzerland sent songs in French, German and Italian and in 1989 even a song in Romansch.

After a series of English language winners in the early and mid-nineties it was perhaps long overdue to free-up the language.  That finally happened in 1999.  Just as two decades earlier the Scandinavian and Benelux countries were initially the most enthusiastic.  Sweden and Iceland fought for the Grand Prix with English songs. A trend soon grew of combining languages. This peaked in 2001 when no less than six entries began in native tongue before switching (sometimes rather clunkily) to English.

The free language rule seems here to stay, but there is still room for some quirkiness. The Belgian runner-up song from 2003 “Sanomi” was in neither Flemish, French nor English, but an imaginary language known only by the group. A year later saw the expansion of the contest to first one, then two semi-finals and simultaneously the growth of ex-patriots lavishing multiple votes for the homeland. This brought a renaissance in non-English songs, particularly from the countries of former Yugoslavia.  This peaked with Serbia’s “Molitva” winning the contest in 2007, the first non-English language winner since the rule changed.  Exactly a decade later Portugal Above) repeated the feat.  Having said that both of Ukraine’s first two winners featured a partial English lyric.   2021 saw a swing in the opposite direction as four of the top five entries were NOT performed in English, and three the year after.