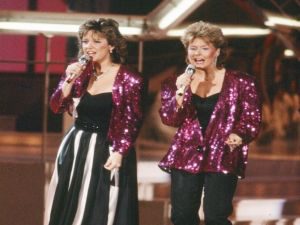 Some countries, like Luxembourg and Monaco, participated in Eurovision for many years and then pulled out. Others like many of the old Eastern bloc, were relative latecomers to the contest but are now regulars. But 1980 is the only instance of a country’s one sole appearance in the event as Morocco sneaked in with a very ethnic song that, perhaps predictably, fared very poorly, picking up just 7 points, all of them from Italy. One of the most striking things about the contest was the juxtaposition of some really ethnic songs (Norway, Morocco, Finland) with some of the blandest pap you have ever heard, Luxembourg’s “Papa Penguin”, and a slew of frothy boy-girl disco numbers. Invariable, the formulaic pap won the day. There were songs called ‘Cinema’, ‘Theater’ and, amazingly, ‘Eurovision’.
Johnny Logan rose above all this exotica with a classic ballad, the first male soloist to win since 1966, if you discount Izhar Cohen. He was certainly knocking back the beers during the voting, and suitably emotional “I love you Ireland” when reprising his song.

Marty Brem of Austria becomes only the second person to perform first at two different contests, solo this time a year after singing with Blue Danube (Finland’s Marion Rung was the other, kicking off proceedings in 1962 and 1973). One of his backing group sported an American football helmet for no apparent reason. 1961 winner Jean-Claude Pascal struck a note for the wrinklies with a surprise return to the contest twenty years after his victory. Even though male-sung Francophone ballads had recently done well in Eurovision, Pascal was just too much of a time-warp. Buck’s Fizz set new standards for raggedness when they reprised the dire “Making Your Mind Up”. However, it is always nice when a Euro veteran finally hits the jackpot and Cheryl Baker certainly qualified as a past member of Coco (1976/78) and The Main Event (1980).

In the spring of 1982, Britain was at war with Argentina over the Falkland Islands. On Saturday 24th April, British forces were in the process of reclaiming South Georgia, while, thousands of miles away, this country at war was hosting the 27th Eurovision Song Contest. Nicole’s winner “Einn Bisschen Frieden” probably owed more to the nuclear paranioa around in the early 80s than to the battle in the Southern hemisphere, but it certainly caught the mood. Victory too, for a man not so much a veteran of Eurovision, but practically part of the furniture. Ralph Siegel’s prodigious output, and success in securing the German song has been a constant of Eurovision for over two decades, and he’s still going strong (3rd place in 1999). Still plenty to amuse (or otherwise) in the dodgy lyric department. Ireland’s entry opened with no less than 32 ‘la’s’, and the UK entry, yet another boy-girl confection, included the immortal line “I could have tooken one step further”.

Star of the show was definitely the presenter Marlene Charell. Now, after a few contests where two presenters had been used, you would have thought they would have shared the workload, because poor old Marlene really earned her crust that night. Not only did she have to employ a third language on the voting (German, obviously), but she also participated in the the interval ballet routine! Now there is good ethnic music and there is bad ethnic music, and I don’t care what anyone says, Spain’s song this year was definitely in the latter category. The poor woman sounded like she was in pain. Who on earth in Madrid thought this was a vote-winner? Possible the least Euro-friendly song ever. In retrospect, it’s now sad to witness this contest again, as two of the most successful performers met tragic ends. One of the German Hoffman’s took his own life, and Israel’s great Ofra Haza passed away with a HIV-related illness.

The start of the show really irritates me. Brooke Shields look-alike Desiree Nosbuch lurched between languages in a way that is now common place, but back in 1984, I for one found it really annoying. She also departed from the norm with a casual, almost laid-back approach, quite a departure from our own dear Katie B. There were a couple of less than brilliant performances. Luxemburg’s Sophie Carle was among the favourites pre-contest, but the moment she opened her mouth, bookmakers could be heard popping corks all over Europe. The UK’s Belle & the Devotions sounded better, but their performance has always been the subject of some intrigue. They were booed in some quarters at the end of the performance. There was conjecture about whether the backup singers on stage actually sang live. The most common explanation for the booing though was the locals anti-British hostility after English soccer fans had trashed Luxembourg city. Italy had an unusual number called “I treni de Tozeur” and which included the contribution of an operatic diva for just a small segment at the end of the song. Another backing singer to catch the eye was the very tall Danish woman turning in a big performance behind the very wonderful Hot Eyes. In the 80’s the term “Danish” was used in some quarters to describe any song of this kind of style. Scandinavian countries were generally the most frequent offenders. The Dutch entry went on to be covered by no less than Cilla Black a decade later (rechristened “A Dream Come True”).

This contest was quite remarkable for the reappearance of so many previous entrants. Is Eurovision such a niche area in the music business that just a small coterie of people bother to make an effort? This year, Denmark, Israel, Italy, Norway, Switzerland, Sweden and Luxemburg all sent artists who had sung before. In addition to these, the German, Austrian, Danish and Turkish entrants would be back in later years. The most Eur-regular packed contest in history. In many ways the night belonged to the presenter Lill Lindfors, who had been part of the duo that finished 2nd in 1966. On returning to oversee the voting, she “accidentally” caught her skirt on part of the stage set; then cleverly unpinning a new skirt from her shoulders; I guess you saw it so you know what I mean. “I am so pleased you won because Norway has come last so many times”. Lill spoke for many of us. In the 60s and 70s Norway sent several lovely quirky little songs

Another year and another style of presenter: after the flooziness of Desiree in 84 and the saucy charms of Lill, we were back to the more traditional with another 1966 entrant, Asa Kleveland, who had finished one place behind Lill. We were back to old style introductions of the artists; Iceland making their debut got a warm response and proceeded to present a song that sounded really promising and then just fizzled out. The contest had opened with the 500th entry to be performed in Euro-history, by Sherisse Laurence competing for Luxembourg. Laurence was another one of the Canadian contingent brought in for the contest by the smaller nations. She could be seen on UK daytime TV in the 80s co-presenting a show called “Circus Circus”. Belgium won of course with 13 year old Sandra Kim, whose age prompted a short-lived protest from second-placed Switzerland (whose song was like a prototype for Celine’s ” Ne Partez Pas Sans Moi”). There were to be more child performers in 1989 before Eurovision went back to being adults-only.

1987 saw a record twenty two countries turning up in Brussels. The UK hit an all-time low (or so we thought!) when Rikki Peebles self-penned song “Only The Light” crawled home in 13th place despite gaining marks from 13 of the 22 juries. This may or may not have prompted the BBC to abandon the jury system for Song For Europe the next year. 1978 hit-maker Plastic Bertrand (“Ca Plane Pour Moi”), from Belgium became the latest member of Luxemburg’s foreign legion. However, anything vaguely punky has never gone down well at Eurovision: Finland 82 and 92, Belgium 83, and even the fantastic-plastic B couldn’t change the pattern. Johnny Logan, of course, takes the Eurovision crown for a second time, a bit more sober than 7 years before, but still “loving you, Ireland”. The Swedish entry had to be renamed “Boogaloo” due to it’s original title including a reference to Coca-Cola.

Arguably the most successful star to emerge from Eurovision came along in 1988, but it was a close thing. (OK, so Abba, Julio, Olivia and Cliff are up there too, but in sheer worldwide sales terms, can they match Celine?). Ms Dion appeared in a startling white jacket with matching tutu, which may have cost a few votes. Interestingly, after three rounds of voting the lead was held by a certain Lara Fabian (for Luxemburg), who 12 years later is seemingly being groomed as the new Celine. The UK had it’s best result since 1981, with the powerful “Go” performed by Scott Fitzgerald, and written by Julie Forsyth, daughter of veteran British entertainer, Bruce. The advantage swung to Switzerland only on the very final, Yugoslavian jury, a fact which Mr Forsyth would bang-on about for quite a while. We also had the first instance of a former presenter returning to compete when Yardeni Arazi (presenter 1979) sang for Israel. Several had gone from performing to presenting, but only Arazi took the further step back to performing (she was part of Chocolate Menta Mastik in 1976).

This was the absolute nadir for little-brat performers, both Israel and France submitting pre-pubesecents to deliver their songs. There was a rumour going around that the contest had been pre-recorded and that Israel’s song had won. Total nonsense of course, but some heavy bets were apparently placed (and lost) on Gili and Galit. Henrik Krogsgaard struck a blow for conductors by forsaking his baton during the Danish entry and joining in as a backing singer/dancer. The impossibly old fashioned song romped to a top 3 position, once more emphasing how cutting-edge Eurovision could be as we approached the 90s. This contest produced perhaps the least popular (and obvious) winner, ever. It was great for Yugoslavia to win after a couple of top-6 results the previous two years, but what appeal the song has has remained a mystery to most of us the last two decades.