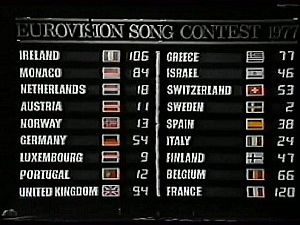 This is an attempt to rank a country’s performance in Eurovision based upon every single result, not just wins, since 1956. For each country, every placing received is divided by the number of entrants that year to give an absolute score.  e.g.  fifth place in a field of twenty is 0.250,   eighteenth in a field of twenty-four is 0.750, and so on.

The total score  is then divided by the number of times they have competed.  Finishing 6/12 counts for the same as finishing 12/24 and countries who have only competed rarely can thus be compared with evergreens. In the era of semi-finals a DNQ is given the same points as finishing last in the final, thats 0.999.   A contest win means not just “nul points” in this calculation but a minus 1.000 before the average is calculated.   In order to qualify for the table a country must have participated in at least five finals.

First of all, given the nature of averages, those countries with the fewest appearances are as ever more prone to shifts in their ranking.  After the 2005 contest Latvia topped this table!  And likewise a great result like a win (Netherlands) or a last place (Germany) has a minor impact for countries who’ve been competing for more than six decades.