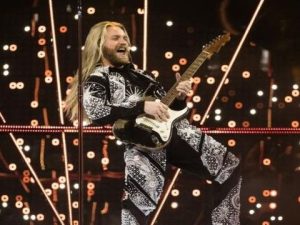 Essex boy Sam started out in the music industry in 2006 and performed with several bands and had spells of busking before joining the TikTok platform where his cover versions of popular songs became viral sensations over the Covid lockdown period.

For 2022 the BBC again decided on an internal selection of performer and song, however their 2020/21 partner the BMG group was replaced by the TaP music management company.  After a short period when it was widely rumoured to be the entry, the already released “Space Man” was officially announced on March 10th as the UK entry for Turin.

“Space Man” was performed twenty-second of twenty-five, between Australia and Poland. Serbia’s Hurricane and Greece’s Stefania.  The performance featured an enormous and dazzling “spacecraft” the largest prop of the contest (and of many others).

In a complete reversal of fortune from the previous year the UK led the scoreboard at the end of the jury vote,  with twelve points from Ukraine, Azerbaijan, Germany, Belgium, France, Georgia, Austria and the Czech Republic.   A very respectable fifth place in the televote followed including a twelve from Malta.

Where to start?  The novel (for the current era) success of a UK entry propelled “Space Man” to #2 in the singles chart becoming the highest charting UK entry since Gina G in 1996, and was eventually certified Silver.   Sam went on to perform the song at The Platinum Party At The Palace as part of Queen Elizabeth II Platinum Jubilee weekend.  Since then he has continued to maintain a high profile with a busy schedule of releases and performances.

Given the euphoria at Sam’s second place in Turin it almost feels mean to add “Space Man” to a blog about a quarter of a century of UK Eurovision misery.  That’s one reason why this blog entry is so late after the event.  As I type this the UK is set to host 2023 Eurovision in Liverpool and the BBC have even re-embraced the Junior Contest.  All credit to BBC Eurovision for putting in all that effort, from the song selection, to the promotion, the incredible staging, and much more.  And even more credit to Sam Ryder of course for charming both the fan contingent and the wider casual viewers.  What a good place to be in 25 years after Katrina.