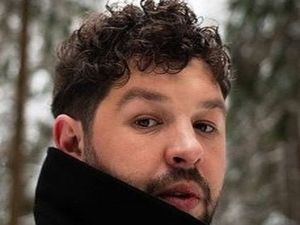 Yorkshire man James Newman is the older brother of chart topping singer John but in his own right has established himself as a songwriter and contributed to several of his brothers songs, including BRIT award winner “Waiting All Night”.

For 2020 the BBC abandoned the idea of a public selection for either singer or song for the first time since 2015.  It was announced that a deal had been reached with record company BMG to internally select both song and performer.

In March 2020 it was revealed that James would perform “My Last Breath” at the 2020 contest,and a lavish video clip was unveiled featuring extreme diver Wim Hof.   However less than three weeks later the 2020 contest was cancelled due to the Covid-19 pandemic.

The UK were one of twenty-six countries who selected their 2020 performer to compete in the 2021 Eurovision, and again the song was also chosen without a public vote.

Despite the pandemic interruption the UK resumed proceedings with a second consecutive last place.   “Embers” also became the first Nul Pointer since two sets of votes (one from juries, one from public televote) were inaugurated in 2016.

James took his result with enormous good humour and charm and has attended fan conventions in the last few months.

It was great to see James given a second go after the 2020 ESC cancellation and when “Embers” was revealed it got a decent reception from UK fans.  However come Rotterdam time the quality of the competing entries suggested a likely poor result, and a lacklustre presentation on the big night sadly confirmed UK fears.