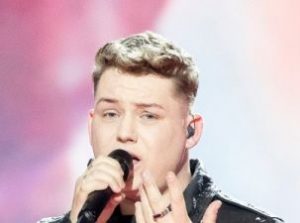 Michael Rice is from Hartlepool in the North-East of England and came to prominence by winning the first series of the BBC Saturday night show “All Together Now” in 2018.  In the final he performed versions of “Crazy In Love” and “Hallelujah”.

Still a national final but a quite radical change as only three songs were chosen but each one was to be performed by two artists and with very different arrangements and styles.  After all six performances the celebrity panel of judges chose their favourite version of each song and these were then voted on by the public.  As in previous years no voting figures were disclosed.

“Bigger Than Us” was performed sixteenth of twenty-six, between Norway’s KEIINO (who won the televote) and Iceland’s memorable Hatari.  The song was co-composed by John Lundvik who competed as performer for his native Sweden in the same contest.

The UK ended the decade as it had started it, i.e by propping up the scoreboard at the end of the night.   8 points from juries and just 3 from the televote (all from Ireland).

Since Tel Aviv Michael has continued to write, record and perform, and is also active on social media.

The fourth year of a public final and the change of format was interesting, the songs less so.   Easy to see why this won as Michael was well known from winning “All Together Now” and the song perceived no doubt as a power ballad with anthem lyrics that would suit Eurovision.   As the contest proved however, a “safe” and formulaic choice with no  unique selling point is just asking to be overlooked.

In 2020 the BBC reverted to an internal selection and unveiled their entry in late February.  however as we all know James would never make it to the Rotterdam stage as the contest was cancelled due to the COVID-19 pandemic.