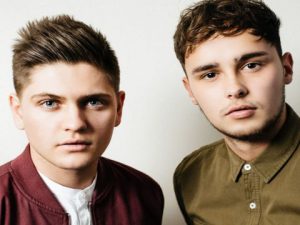 Joe Woolford from Ruthin and Jake Shakeshaft from Stoke met when competing in the 2015 series of The Voice UK.  Jake was in Team will.i.am and made it through the battle rounds but was eliminated in the knockout round.  Joe was in Team Rita Ora and fared better, making it as far as the semi-final.

After five years of internally selecting the artists and seven of internally selecting the song the BBC in 2016 went back at last to giving the licence payers a say and re-instated a public final. Submissions were invited from allcomers and the six selected ditties would compete in a televised final on February 26th, four days after being revealed (just like the old days) on BBC Radio 2. To many peoples chagrin the show was relegated to “minority” channel BBC4.

Joe and Jake performed “You’re Not Alone” in the sixth and last “pimp” slot, and were announced as winners by compere Mel Giedroyc. No voting figures or other positions were revealed.

Performed twenty-fifth of twenty-six, between Austria and Armenia. For the second time in three years the producers gifted the UK a position in the last two songs performed.

Joe and Jake were just the second male duo to represent the UK at Eurovision, a whole fifty-five years after The Allisons.

This was the eighth time that a UK entry had achieved the exact same position as it’s predecessor, but the first since 1995.

A new voting system in 2016 means though that some comparisons with previous years are meaningless. In 2016 we had two sets of votes, from juries and then televoters, meaning double points potentially available.

In the jury vote “You’re Not Alone” managed 54 points, accruing votes from ten of the other forty-one countries voting. It’s top mark was a twelve from Malta. However in the televote the song managed just 8 points, it’s only friends the English speaking triumvirate of Malta, Ireland and Australia, the latters four points being it’s best mark.

Joe and Jake have remained recording and performing together. At the start of 2017 they released as new single “Tongue Tied”.

Regardless of the eventual outcome in Stockholm, lets get this out of the way for starters: it was just frigging great to have a UK national final back. Yes, sometimes the great unwashed hordes may choose the wrong song (with or without the advice of John Barrowman). And yes, some great internal selections have won Eurovision. But none of those internal choices (apart from maybe Blue) set the scoreboard alight.

That being said the 2016 BBC final didn’t come up with a great crop of songs. “You’re Not Alone” was probably the best choice (although some fans of Bianca’s power ballad still feel aggrieved). If Eurovision was decided on youthful energy and enthusiasm then Joe and Jake would have been high up on the left side of the scoreboard. Sadly after some half-decent jury scores that placed them 17th (in Bonnie/Molly territory) the dull thud of just eight points (and second-last) in the televote relegated them to 24th, which seemed very harsh.

“You’re Not Alone” thus brings us up to date on this review of two decades of UK despair. Thank you for all the nice comments on Twitter. We’re planning a few thoughts on lessons learnt (or not) and Lucie’s chances before the big night in Kyiv. But for now our boys….