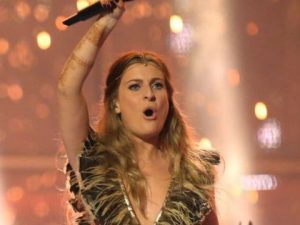 Molly Smitten-Downes was born and raised in Leicestershire and first came to notice in the dance music world as part of “Stunt” and also in a collaboration with the legendary Basshunter.

A fourth internal selection by Auntie but this time not a “big name” established act. The BBC in their wisdom decided to modify their approach just a bit by going for a song comissioned from a bright new act and thus BBC Eurovision head honcho Guy Freeman approached Molly with a view to writing and performing the 2014 UK entry. She accepted and thus her ditty “Children Of The Universe” co-composed with Swede Anders Hansson flew the UK flag in Copenhagen.

Performed very last of the 26 songs in what has been called the “pimp slot” in the second contest not to feature a random draw order.

After the contest BBC commentator Graham Norton claimed that the underwhelming presentation of the previous entry from San Marino had encouraged viewers to break off from the TV and so they missed the UK entry.

“Children Of The Universe” got votes from nine of the other thirty-six countries voting. Its top vote was an eight from reliable Ireland.

Just a month or so after Eurovision Molly performed a set at a rainy Glastonbury that included her Eurovision song (it’s on YT). More recently things seem to have come full circle she’s reverted back to dance music collaborations.

After the previous two years of the BBC selecting venerable and famous artistes with little effect it was definitely time for a change of approach. By 2014 internet wags were suggesting Ken Dodd or Dame Vera Lynn to represent the UK.  So we should be thankful that Auntie’s Eurovision supremo Guy Freeman opted for a more youthful choice. Some effort was put into the reveal video too, and so well received was the song in fan circles that many predicted the best UK result since Jade in 2009 (or an even better outcome).

Sadly, despite this optimism and a plum draw the song limped home just a couple of places higher than Bonnie. Hindsight is always wonderful of course, but we never quite got all that optimism. It was (much) younger, (much) fresher, but a song will always need a hook and a melody, and on both counts “Children Of The Universe” failed to deliver.