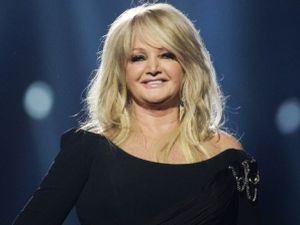 Born Gaynor Hopkins in the South Wales village of Skewen, Bonnie scored her first chart hit in 1976. “Lost In France” was soon followed by “It’s A Heartache” which went on to be a huge hit around the globe. After a few less successful years she roared back in 1983 with the help of Jim Steinman. “Total Eclipse Of The Heart” topped the charts worldwide and was soon followed by Bonnie’s last top ten hit “Holding Out For A Hero” in 1984.

The third year in a row where the BBC went with an internal selection of song and singer and the third where they procured an established and well known act. In 2012 Bonnie was preparing to release her first album in seven years. The album was titled “Rocks And Honey” and was recorded in Nashville with local producers as she attempted to recapture the country-rock sound of some of her earliest hits.

“Believe In Me“ was plucked from the album as the UK representative for Eurovision in Malmo thus delaying the release of the album for some months. The BBC unveiled singer and song in March 2013.

The song was performed 15th of 26 in the first contest not to feature a random draw order. Each country drew lots merely for first or second half of performance, after that the producers decided the order “to make a more exciting show and showcase every song”. This policy has remained in place to this day.

In this case the producers placed Bonnie between the camp operatics of the Romanian entry and the home song from Sweden.

“Believe In Me” gathered votes from seven of the other thirty-eight countries voting. Its top vote was a seven from Ireland.

Bonnie hasn’t released a new solo album since Eurovision but she has contributed in duet to recent albums from Rhydian Roberts and Frankie Miller.

First of all we have to say that Bonnie was wonderful at Eurovision and sold the song as best she could on the big night. But the song from first listen always screamed “pleasant album track”. As it was of course.   Four years on it still somewhat beggars belief that the BBC thought the song even a half-competitive entry for Eurovision. Thankfully something a bit more imaginative (but not necessarily more successful) was just around the corner, but in the context of this blog the lazy UK 2013 effort seems like a barrel-scraping low.