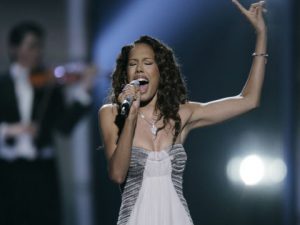 Jade Ewen was born in East London in 1988 and was a performer from an early age, eventually gaining a scholarship to the legendary Sylvia Young Theatre School. By 2009 she had racked up an impressive CV of small roles on TV and the stage, and was also songwriting and releasing the odd single.

2009 saw a new and very elaborate approach from the BBC, as the Eurovision selection was brought to multiple prime-time shows on Saturday night on BBC1 in largely the same style as the successful casting shows for starring roles in West End shows like Joseph and the Amazing Technicolor Dreamcoat.

Another huge change was that the process would be merely to select a performer. The song had already been chosen. The BBC revealed in October 2008 that no less than Andrew Lloyd Webber had been recruited to provide the song, and the man himself broadcast an appeal for budding contestants.

The first show re-iterated how serious the BBC were taking things by including Lloyd Webber meeting none other than Vladimir Putin (as Russia would be hosting this years event). It also featured various candidates auditioning, but all in a rather opaque fashion. This was re-inforced when right at the last minute one Jade Ewen was brought in, and in a flash she had joined five other acts in second show. As the weeks wore on Jade continued to get complementary comments from Lloyd Webber and the assembled experts (Lulu in particular was very vocal in her support). Despite this, in the penultimate show Jade found herself in danger of elimination but was saved by Lloyd Webber, and a week later sailed to victory over the long-forgotten Francine and Nicola.

Drawn 23rd of 25 in the first contest to combine each country’s vote from a 50/50 mix of televoting and a five-member expert jury. This system was in operation from 2009 to 2015.

It was revealed part way through the process that “It’s My Time” was co-composed by legendary American songwriter Diane Warren.

Uniquely this year the BBC sent the UK entrant around Europe to promote the song before the contest.

Lord Webber appeared on stage in Moscow to accompany Jade by playing the piano. However perhaps more memorable was one of the miming violinists who almost collided with our Jade half-way through verse two.

“It’s My Time” got votes from thirty-one of the other forty-one countries voting. Its top vote was a twelve from Greece.

The song made #27 in the UK singles chart

Far and away the most successful post-Eurovision of the artists covered in this blog, Jade released a follow-up single “My Man” that made #35 in September 2009, this coincided with her being recruited to join the Sugababes as a replacement for Keisha Buchanan, and her solo album project was thus put on hold. After the Sugababes disbanded she has returned to the stage to much acclaim, most recently in the West End as Princess Jasmine in Aladdin.

Given how much the BBC invested in the whole project, a fifth place (strangely the only time the UK has ever occupied that position in sixty years of the contest) must have come as a huge relief. The song broke no new ground despite the awesome pedigree of its composers, but hit all the right buttons for a Eurovision belter ballad. And despite our qualms over how Jade was parachuted into the selection show and then regularly pimped by the panel, she’s a class act (as proven by her later success) and delivered brilliantly on the night. A clear second best UK result of the millennium and a brief respite from for the UK years of hurt.