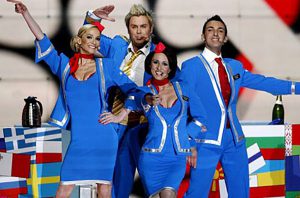 Scooch is comprised of the poptastic quartet of Caroline Barnes, David Ducasse, Natalie Powers and Russ Spencer, who first came to our attention in 1999 when they featured in and won a competition on the BBC’s Saturday morning show Live & Kicking. This was to give them the first of no less than four top thirty hits in the next twelve months, the most successful being “More Than I Needed To Know”, that peaked at #5 in early 2000. However a year so later they were released by their record company and the four members split, only re-uniting for the occasional club PA or Pride.

One of the most memorable UK finals ever, once more with six songs, however a new twist this time that the public vote would reduce the six songs to just a couple which would slug it out for the ticket to Helsinki.  The line-up featured two singers from established groups trying to forge a solo career, however Liz McClarnon (Atomic Kitten) and Brian Harvey (East 17) finished in the last two places. Just above them was Justin Hawkins of The Darkness, here in duet with Beverlei Brown. Apparently Mr Hawkins was unhappy with the outcome and suggested that his vocal partner being black was a factor in the voting.

The final two consisted of Scooch and Cyndi, the latter’s big ballad “I’ll Leave My Heart” also attracting some controversy as the melody was ever so close to “The Bonnie Banks Of Loch Lomond”. This year like many, the BBC employed a celebrity panel to comment on the songs and John Barrowman was very vocal in his support for Scooch.

Then, as if this final didn’t already have it all, there was a legendary cock-up in the final announcement when the late great Sir Terry Wogan and Fearne Cotton simultaneously announced different winners. After the confusion cleared it was Scooch packing their complimentary nuts for Finland by a margin of 53% to 47%.

Drawn 19th of 24, immediately after the two songs that would finish first and second, “Molitva” and “Dancing Lasha Tumbai”.

Result: 23rd of 24.  The UK and France both ended the night on 19 points however the French entry was placed higher as it received votes from more countries.

“Flying The Flag” got votes from just two of the other forty-one countries, however it’s top vote was a twelve from Malta (the first maximum for the UK since 2002). The other was a seven from Ireland.

The song made #5 in the UK singles chart

The fab foursome have each pursued successful careers in that business we call show. Caroline and Russ have carved out successful careers in musical theatre while David and Natalie both work nurturing future talent in stage schools and academies. They also still combine to do live shows and Prides and have an active presence on social media.

This song gets such a bad press. In the later years when the BBC went for an internal selection of song the cry was (and I paraphrase here) “if you let the public decide they’ll pick Scooch”. Oblivious of course to the fact that many of those internal selections actually fared equally poorly. Also of course that we wouldn’t have John Barrowman’s “enthusiasm” every year. Even the UK’s first twelve points for five years was viewed by some as Malta taking the piss.

Another UK entry where the stageing in a small studio worked but looked rather silly in the vast contest arena (not that the UK have been the only culprits here: I give you Dustin The Turkey). Equally the addition of more innuendo than an episode of “Are You Being Served” was clearly not designed to chime with an entire continent. Yet “Flying The Flag” remains the most recent UK entry to make the top five (or even top ten) of the singles chart and we think that however polarizing it was it was well worth the flight. We’re just having something to suck on for landing….