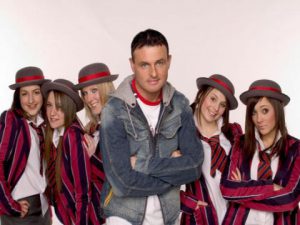 Stockport-born Daz Sampson was no newcomer to the charts when he entered the 2006 UK selection. As a DJ and music producer he had already contributed to no less than nine UK hit singles, under the banners of Bus Stop, Rikki & Daz, Barndance Boys and Uniting Nations, the last acts “Out Of Touch” charting highest of those at #7 in 2004.

The 2006 UK final reverted back to six songs and again included a couple of star names, specifically Antony Costa of boy band Blue and singer/actress Kym Marsh, late of Hear’Say, early of Coronation Street. These two would finish second and fourth respectively as “Teenage Life” won by a clear margin.

“Teenage Life” lyrics included a couple of autobiographical references, “Mr T” and “Avy” being one of Daz’s teachers and his school in Stockport.

One of the backing singers was Emily Reed, runner up to Jemini in the 2003 UK final.

“Teenage Life” got votes from ten of the other thirty-seven countries. Its top vote was an eight from Ireland.

The song made #8 in the UK singles chart

Sadly Daz wouldn’t trouble the charts again after his Eurovision effort and today he plies his trade as a football manager in the semi-professional game in northern England.

One of the most memorable songs in our line-up, “Teenage Life” was certainly different. Daz’s competently delivered swag-rap was paired with a backing of “schoolgirls” perched on old-fashioned school desks. The cute backing vocals on the recorded version sound like kids but a lot of us feared that the obviously older singers on the night would be unable to replicate that live, and sadly they weren’t. The visual combination of a grown-up bloke rapping about his success in front of a bunch of teenage girls was also maybe a step too far for middle Europe.   However as a three minute pop song we think that “Teenage Life” has stood the test of time. The songs UK chart performance also suggests it deserved a better fate in a stellar and high quality contest. “Five stars for me”?    .. maybe four Daz.