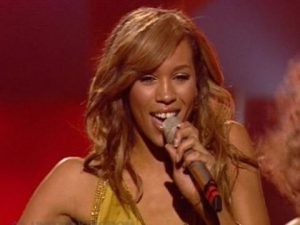 Javine Hylton was born in Kensington and her first steps in showbiz were in musical theatre, however in 2002 she auditioned for ITV show “Popstars: The Rivals”. The premise of the show was to select members of both a boy band and girl band then pitch their debut singles against each other in a chart race. Poor old Javine was eliminated at the very last hurdle, thus by one place missing out on becoming one-fifth of Girls Aloud.

Despite this setback, Javine was able to build on this exposure as she swiftly obtained a solo record deal and racked up no less that four top twenty hits in the next two years. The first one “Real Things” charted highest, reaching #4 in 2003.

2005 saw one of the most memorable UK finals in recent times. The same format as 2004 was broadly retained, however the number of finalists reduced from six to five. Javine’s four opponents included one Gina G no less, performer of the 1996 UK entry “Ooh Aah Just A Little Bit”, the last UK entry to top the singles chart. Sadly her 2005 song “Flashback” finished a distant last. The other notable finalist was one Miss Katie Price, aka Jordan, about to use Eurovision to launch her singing career. A very heavily pregnant Ms Price performed “Not Just Anybody” in an eye-catching pink jumpsuit and at the end of the voting trailed our Javine by just 101 to 116.

Drawn 2nd of 24 in the second contest of the semi-final era with all contestants voting.

Unlike 2002 the reprise of songs was not in reverse draw order.

“Touch My Fire” got votes from four of the other thirty-eight countries. Its top vote was an eight from Ireland.

The song made #18 in the UK singles chart

After Eurovision Javine failed to trouble the singles chart again other than a collaboration with Soul Avengerz in 2006, “Don’t Let The Morning Come”, that reached #49. For the remainder of the decade she featured in several reality TV shows including The Games and Celebrity Come Dine With Me.

Very possibly the most hard done by of all the UK entries in our blog. Javine was apparently suffering from a throat infection on the night of the final and it showed somewhat but she still produced a fine vocal performance and the staging was vibrant and professional. The song was also very “current” for a UK entry, and this is what leads us to a possible reason for it’s downfall. “Touch My Fire” was performed second, and before the night was over we had heard several other songs in a very much similar style. Whether they were better or worse was open to conjecture but it’s fair to say that those later songs may have wiped Javine’s effort from their memory. The Greek entry was the very last song to be performed in that style and would claim the Grand Prix. Yes, “Touch My Fire” deserved much much better.