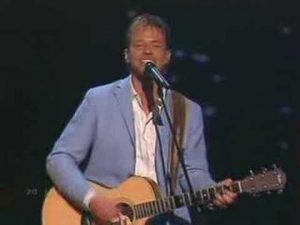 The second Welsh UK entrant of the new millennium was born James Mullett in Cardiff in 1976 but adopted the professional name of James Fox. After honing his trade in local clubs he was briefly part of a boyband with 2016 The Voice winner Kevin Simm. In 2003 James came to national attention when he took part in BBC casting show Fame Academy, finishing fifth.

Following the 2003 disaster the BBC abandoned the previous format in favour of a six song televised final with a much higher profile that was hosted by Sir Terry Wogan and Gaby Roslin, a pairing more commonly associated at the time with Children In Need. (!)

Despite misgivings about the 2003 result, the regional collation of televoting was retained, this time combined with shiny new SMS voting.

The expanded 2004 final saw a variety of musical styles and in that respect dragged UK Eurovision into the new millennium as club bangers and power ballads took a back seat. However among the artists James was far and away the best known and “Hold On To Our Love” triumphed by a clear margin over “Leading Me On” by boyband Hyrise.

Drawn 20thh of 24 in the first contest of the semi-final era. The UK, as one of the “Big Four” contributors to the European Broadcasting Union and Eurovision, had and continue to have automatic entry to the Saturday final.

In this new era, all countries who participated got to vote in the final, meaning usually forty or so sets of votes, effectively re-writing all records about highest points.

“Hold On To Our Love”” got votes from ten of the other twenty-three countries. Its top vote was an eight from Ireland.

The song made #13 in the UK singles chart

James has continued to be very active and successful since Eurovision, predominantly in musical theatre. Outside of that, in 2008 he penned and sang the Cardiff City FA Cup song “Bluebirds Flying High” and in 2012 recorded a song “Landlocked” for the British Legion Poppy Appeal.

After the Jemini disaster James Fox certainly steadied the ship. We can’t get excited by the very “meh” song but James’ talents secured a result comparable to that of Nicki French and Lindsay. At the time this was still viewed as rather a disappointment for the UK. Much worse was to come ….