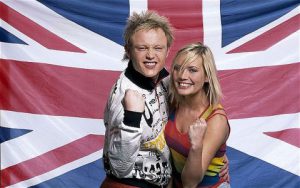 Gemma Abbey and Chris Cromby met at the Starlight Stage School and were part of a troupe of students from the academy who cut their teeth performing locally around Merseyside. They entered the 2003 UK Eurovision under the soubriquet of “Tricity”.

After the 2002 success the BBC saw no reason to change the overall format and so eight songs were whittled down to four as usual by Radio 2 listeners. This is where it gets interesting. One of the four finalists was “Wait For The Moment” performed by Dutch singer Esther Hart. Barely a week after the radio semi-final Esther qualified for the Dutch final with a song called “One More Night” and promptly withdrew from the UK final. Her song remained, however it was now assigned to a new singer, one Simon Chapman, and also rather strangely completely renamed to “Now And Forever”. Additionally the performers of “Cry Baby” were renamed from “Tricity” to “Jemini”.

Come the televised final the BBC changed the voting format, and here lies another peculiarity. Previous years had seen a simple tallying of the national phone vote, however in 2003 the BBC decided to count the public vote region by region and then assign absolute points (in the Eurovision voting tradition) region by region. At the end of the voting, “Cry Baby” had attained a very narrow victory over runner-up song “Help Me” performed by Emily Reed. The margin was 68 points to 64. It was swiftly noticed that “Cry Baby”s top votes came from the less populated regions of the UK compared to “Help Me” leading to the suggestion that the latter song had won the popular vote, as opposed to the “electoral college“ so to speak. This theory has never been confirmed either way. Emily Reed did make it to Eurovision three years later as part of Daz Sampson’s backing troupe of “ schoolgirls”.

Meanwhile the eviscerated “Wait For The Moment” aka “Now And Forever” failed to win a single point from the voters and finished a humiliating last of four. Just a day before the show Esther Hart proved that she’d backed the right horse when her Dutch song won the ticket to Riga, where she would end the night in 13th place.

Drawn 15thh of 26 (right after Esther Hart!) in the first contest with twenty-six entrants and the last contest when countries were denied entry either because of their average points score over recent years, or just because of a bad result last year. From 2004 the semi-finals changed everything.

“Cry Baby” was the first and only UK Eurovision entry whose title initials matched those of the year before (“Come Back”). This is probably where the comparison ends.

“Cry Baby” got votes from none of the other twenty-five countries. Its top vote was , er……

The song made #15 in the UK singles chart

Chris Cromby is still gigging around his native Merseyside. Gemma is now a journalist, but sadly recently hit the headlines for all the wrong reasons in a Tax Credits fraud case.

Our Scouse duo of course scored a big fat Nul Points that at the time was a great boon for this site!. But was it deserved?. Undeniably a dodgy vocal from Gemma, apparently her mic wasn’t working. Chris did his best, but his “Come On Latvia“ moment was probably counter-productive. Much was made of anti-UK sentiment because of the invasion of Iraq.

Here’s a novel thought: maybe “Cry Baby” was never that good a song in the first place.. Imagine Michael Buble and Mariah Carey on top form, would it sound any better, or inspire our European cousins to pick up the phone?