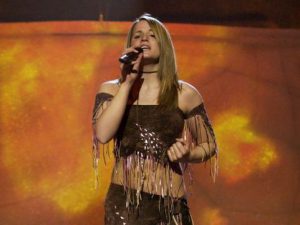 Jessica Garlick from Kidwelly in Camarthenshire came to national attention in the latter part of 2001 when she competed in the first series of Pop Idol. She performed two Madonna songs, “Crazy For You” in the qualifying heat and then “Papa Don’t Preach in the first show of the finals. Sadly she then came to grief in Christmas week when her stab at countryman Skakin Stevens “Merry Christmas Everyone” failed to impress the viewers and she was eliminated, thus finishing ninth in the series.

The BBC kept to the same format, however between the radio semi-final and the televised final it came to light that one of the four finalists, “Never In A Million Years” by Zee Asha, had previously been commercially released and was thus disqualified, meaning that the fifth-placed song in the semi, “Every Step Of The Way” by Level Best, came in as a late sub.

The televised final was hosted by Claire Sweeney and the late (and still much-missed) Christopher Price. It featured possibly the starriest line-up in a UK final for decades as alongside Jessica and Level Best were Tricia Penrose (Gina from Heartbeat) and a bizarre combo called “Surf ‘N’ Turf” which included among its members TV presenters Matt Allwright and Jonathan Maitland.

When the public vote was revealed, “Come Back” had romped to a landslide victory with over sixty-seven thousand votes, almost forty thousand clear of Penrose’s “DJ Romeo”.

“Come Back” was composed by Martyn Baylay who combined his songwriting with his proper job as a commercial airline pilot.

The 2002 contest was the first to be staged in a “new” Eurovision country from east of the old “iron curtain”. Fifteen years on, six contests have been staged in these countries and a seventh will be in Kyiv in 2017.

Drawn 2nd of 24, traditionally the “graveyard slot”. However in 2002 the reprise of songs just before the voting was done in reverse order, as it was perceived that later performed songs had an inherent advantage with televoters.

Sir Terry Wogan: “her dress has been through the shredder”

Rules about ranking entries on equal points have varied over the years, however official records for the 2002 contest still show a tie for third place.

“Come Back” got votes from eighteen of the other twenty-three countries. Its top vote was a twelve from Austria.

The song made #13 in the UK singles chart

After a few more years in the music business Jessica turned her attention to being a wife and then mother. She attempted a pop comeback in 2009 with new recordings.

The best scoring UK entry of the twenty-first century deserves more respect. Only Jade Ewen in 2009 comes close, and the latter had the benefit of Sir Andrew Lloyd-Webber, Diane Warren and a quite unusual BBC promotional campaign pre-contest.

Kudos to the UK public for once for plumping for Jessica above the perky Tricia Penrose offering. Having said that, if “Never In A Million Years” hadn’t been DQ’d we may have seen a challenger.

Apart from one slightly dodgy moment towards the end of the second verse Jessica’s vocal was exemplary and that long note at the end of the first chorus was sublime. The whole presentation was just perfect, the backing singers added loads both vocally and visually. Sometimes less is more than more. A quite wonderful UK entry.