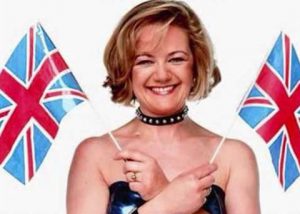 Nicki French began her career as a session singer but her big break came in the mid Nineties when she recorded a dance cover of Bonnie Tyler’s “Total Eclipse Of The Heart” with John Springate, formerly of the Glitter Band. This was heard by Mike Stock and Matt Aitken, who re-recorded the track with Nicki in multiple mixes, and a worldwide smash hit transpired, reaching #5 in the UK and #2 in the US. In the aftermatch French released several other singles but these fell short of the top 40.

2000 saw the same format as previously with Radio 2 listeners voting on eight songs and their top 4 being performed in a televised final. “Don’t Play That Song Again” finished a clear five thousand votes ahead of runner-up “Only The Women Know” by Sixchix, which incidentally was composed by Kimberly Rew of Katrina & The Waves.

Drawn 3rdh of 24 in the first contest of the new millennium.

“Don’t Play That Song Again” was one of the bookmakers favourites for the 2000 contest and was flanked in performance order by two of the other favourites in the Netherlands and Estonia.

The entry got votes from eight of the other twenty-three countries. Its top vote was six, from both Malta and Turkey.

The song made #34 in the UK singles chart

Nicki French has remained an enthusiastic supporter of all things Eurovision. She has regularly co-hosted the annual London Eurovision Party, and has also performed and even recorded covers of other Eurovision songs. She has remained a prolific recording artist albeit primarily in the Hi-NRG dance genre, where her regular PAs and Pride performances have made her much-cherished.

After the back-to-back triumphs of “Diva” and “Take Me To Your Heaven” it was perhaps understandable to think that 2000 would see another feel-good danceable anthem triumph. In that respect the first contest threw up an unexpected outcome as the Olsen Brothers timeless charm triumphed, backed up the sultry Alsou and the britpop-lyte of Brainstorm. Not a club banger to be seen, and “Don’t Play That Song Again” fell victim to the change in Europe’s tastes, alongside the favoured Dutch and Norwegian entries, among others.

It also has to be said that (not for the last time) the joie-de-vivre of the performance in a UK final in a small studio did not translate well to the massive arena on contest night. 16th on at the time was the worst ever UK result, but again, far worse was to come…..