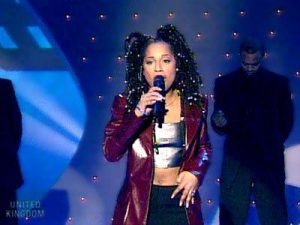 Imaani Saleem was born the much plainer Melanie Crosdale in Nottingham in 1972.

The successful formula of 1997 was unsurprisingly repeated, although Terry Wogan was brought in as host for the televised final. “Where Are You” won by just over four thousand votes from “Don’t It Make You Feel So Good” by Alberta. The latter song had some legs though as it went on to be used in a yoghurt commercial.

Drawn 16th of 25 in the last contest with language restriction. The top three at the end of the night included two of the three songs sung in English (UK and Malta).

This was the first contest where all countries with sufficient technology used 100% televoting.

It was also the last contest to date with an orchestra. Since then an orchestra has been “optional” and every host has declined said option. No less than Sir James Macmillan took the baton for the UK entry.

1998 was the first contest to be held in a large arena with an audience predominantly full of exuberant fans rather than dinner-suited invited guests. This genie was well and truly out of the bottle!.

Where Are You got votes from every one of the other twenty-four countries (the only song to do so that year), including 12s from Croatia, Israel, Romania and Turkey.

The somg made #15 in the UK singles chart.

A follow-up single was scheduled but sadly cancelled by Imaani’s record company. However a couple of years later she was back in the top twenty of the singles chart as featured vocalist on “Freak Like Me” by Tru Faith & Dub Conspiracy. Since then Imaani has sung with the wonderful Incognito and released a solo album in 2014 called “Standing Tall”. Her website bio conspicously omits any mention of Eurovision.

Birmingham staged an awesome Eurovision that set the template for the contest we know and love in the twenty-first century and Imaani didn’t let the home crowd down. An un-Eurovisiony song (I’d say “take note”, but that’s silly as we’re talking eighteen years ago). A superlative performance that almost won against iconic Dana International and Chiara. No doubt the last year of the language rule still helped. But nonetheless a fantastic effort.