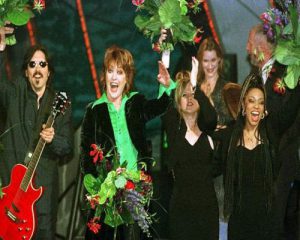 Katrina & The Waves date back to a decade and a half before their landslide Eurovision triumph. Comprising lead singer Katrina Leskanich, alongside Vince de la Cruz, Alex Cooper and Kimberley Rew. Their signature hit, of course was “Walking On Sunshine” which made the top ten in both the UK and the USA in 1985.

Curiously when Eurovision 1997 came around “Love Shine A Light” composer Rew excused himself from performing duties and was replaced on the night by singer/actor Phil Nichol.

1997 was a public selection. Eight songs featured in a Radio 2 semi-final with the top four advancing to a televised final hosted by Dale Winton. The winning song won by a clear margin, with over eleven thousand votes more than runner-up, “Yodel In The Canyon Of Love” by Do-Re-Mi, featuring the late X Factor finalist Kerry McGregor.

Drawn 24th of 25 in the penultimate contest with language restriction

5 of the 25 countries used televoting, which was piloted for the very first time

The winning song scored 227 points, a record at the time. This has been regularly surpassed since the advent of the semi-finals in 2004 (with all participants voting) and is now truly dwarved by the double-set-of-votes system introduced in 2016.

Love Shine A Light got votes from every one of the other twenty-four countries, including 12s from Austria, Croatia, Denmark, France, Hungary, Ireland, Netherlands, Russia, Sweden and Switzerland

The song made #3 in the UK singles chart.

Sadly Katrina & The Waves disbanded within a couple of years of winning the contest.

In 2000 the other three members of the group wrote and composed “Only The Women Know” for the UK final. The song was performed by Six Chix and finished runner-up to “Don’t Play That Song Again”.

Katrina herself continues to enthusiastically support the contest, regularly turning up to perform her winner and/or act as a pundit, as she did at the 2016 UK final.

The UK’s most recent win ranks alongside it’s very first one exactly three decades earlier both in scale and in merit. None of the advantages of a good draw and being sung in English would have made a scrap of difference. Having said that, Eurovision was a different beast twenty years ago. Ireland had won four of the last five contests and Love Shine A Light musically didn’t stray far from that template. However it was enhanced by a feel good message (the song was originally penned for the Samaritans) and a powerhouse vocal from Katrina, ably supported by stellar backing singers Beverley Skeete and Miriam Stockley.